I’ve already said how inspired I am by the lifelong writings of Wendell Berry, so imagine my delight in recently listening to him in conversation with The Stone Barns Center’s president Fred Kirschenmann. 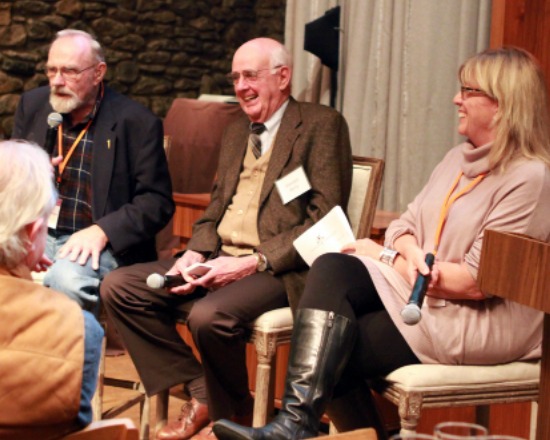 I’ve already told you how inspired I am by the lifelong writings of Wendell Berry, a Kentucky sheep farmer widely regarded as the poet laureate of American agriculture.

So imagine my delight to have a seat in the repurposed hayloft at Stone Barns Center on Thursday, where a packed audience sat in rapture listening to the almighty Berry in conversation with the center’s president, Fred Kirschenmann, and Berry’s daughter Mary, who obviously doesn’t fall far from the tree.

It was the keynote of the center’s annual “Young Farmers Conference,” a multi-day meeting for those who are new to farming, no matter when they happened to be born. Hundreds of attendees come from across the country to learn about everything from electric fencing (taught by my husband, the center’s livestock farmer), farm business planning, seed swaps, soil fertility, pollination and even traditional work songs from around the world. (The hay barn where the Berrys spoke has quite a history: a century ago it held the Rockefellers’ own dairy cows’ diet; this fall it was site to a groundbreaking meeting of the minds about seed breeding, hosted by Blue Hill at Stone Barns‘ chef Dan Barber.)

I was surprised by how much I loved hearing Mary, executive director of the new Berry Center. But my favorite words, predictably, came in a southern drawl from a white-haired man who inspires so many farmers, young and otherwise. Four highlights:

1) Wendell Berry spoke at length about the value of what he calls “country pleasures,” like jumping in the river on a summer afternoon and walking home uphill after, experiences that are all but lost in a world where most people spend more time with screens than trees (a notion I was tempted to live tweet, but the irony was too great).

2) He decried the arrival of commodity soy and corn in his Kentucky county, comparing it to the foolishness of fracking. The only difference between fracking-enduced explosions and soy-enduced erosion, he sagely said, is speed. Erosion’s slower, but the result is the same: exhaustion of our most precious natural resources. Amen.

3) He spoke of another kind of erosion, that of community, and recalled the days when his neighbors took pride in helping one another, gratis. One farmer friend of his had, in his lifetime, helped every single farm on his road, and never accepted any payment except a shared meal when the work was done. By the end of Berry’s description, everyone in the room would have stepped into a one-way time machine.

4) In conclusion, he spoke of sharing his land with wildlife and reasoned that it is not they who should be called wild animals, as they build homes and raise their young, year after year. Rather it is the human race with our blind destruction of soil, who deserve that description.

But while his remarks were unforgettable, you shouldn’t be sorry you missed them. Just read any of his essays. I recommend you start with The Pleasures of Eating.