Bed-Stuy now boasts a purveyor other neighborhoods can covet: Nextdoorganics, a community supported agriculture project and food delivery service with its own storefront at 360 Throop Ave. 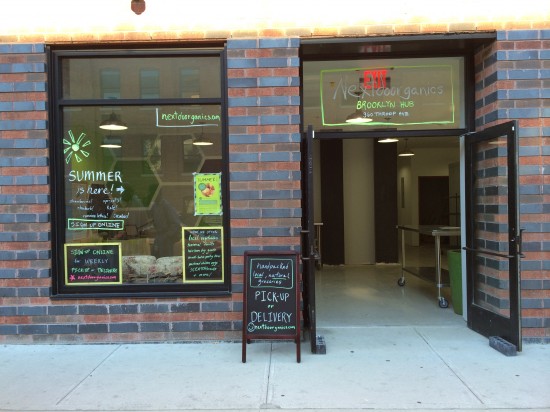 Bed-Stuy may not have a Fairway or a food co-op, but it now boasts a purveyor other Brooklyn neighborhoods will covet: Nextdoorganics, a community supported agriculture project and food delivery service with its very own storefront at 360 Throop Ave.

Last month the souped-up CSA — which offers regionally grown produce as well as products like The Piggery pork, SCRATCHbread loaves, Granola Lab’s cranberry cashew, organic California citrus and Brewklyn Grind coffee — moved from subleased space in the back of a Bed-Stuy commercial kitchen to the retail storefront that will serve as its headquarters.

The new office will be open to the public, and on June 22 it will host an opening party with food and music from 3-9 p.m.

The three-year-old company, which currently serves around 500 weekly customers in north-central Brooklyn and Manhattan, already stood out from most CSA-style programs in several ways, says Nextdoorganics CEO and co-founder Josh Cook. While CSAs were designed to “stabilize flow of cash between farmers and people that are interested in them,” he says, the goal of Nextdoorganics is to bring access to better quality food to as wide an audience as possible, and to support a larger number of farmers and producers.

Traditionally CSA customers pay a lump sum up front to just one local farm, then pick up a weekly supply of food at a set location in their neighborhood. Nextdoorganics instead builds weekly shares from a cutting-edge collection of small-scale suppliers that include regional farming cooperatives and distributors, Brooklyn food makers and a growing number of truly local farms such as Sky Vegetables in the Bronx and EcoStation:NY’s Bushwick Campus Farm.

(Nextdoorganics originally began to connect CSA programs to urban farms, says Cook, who actually grew some of the produce they delivered early on with his co-founder Kris Schumacher, on Schumacher’s Providence, RI property.)

Each week, customers can change their subscription size — plans range from $20 to $50 per week — order additional specialty food items or even cancel their subscription. (In the near future, says Cook, they expect to be able to accept EBT.) Like Quinciple, another Brooklyn-based, CSA-style business, Nextdoorganics also offers delivery on a sliding scale. Currently, bike delivery to your home is an extra $5, or you could pay $2 to use a pick-up point at a participating business or restaurant such as Roberta’s, Egg, Sycamore or Four & Twenty Blackbirds.

Of course, picking it up from Nextdoorganics’ new headquarters is free.

Soon, says Cook, they hope to use the space to sell coffee to go and other items at retail; more importantly, the extra refrigerators and freezers it holds will allow the company to grow. The goal is to double the amount of customers it can serve by the end of the year, and eventually, says Cook, add “franchises” in Manhattan or possibly other cities where the model might work.

Until then, check Nextdoorganics’ one-and-only outpost out yourself this Sunday in Bed-Stuy.