Homebrewers and Professionals Unite to Brew for This Weekend’s NY Pro-Am Brew P.I.T.

Earlier this year, five New York homebrewers paired with five New York breweries to create a special brew. The amateurs will share the fruits of that experience this Saturday, alongside their respective paired professionals, at NY Pro-Am Brew P.I.T. 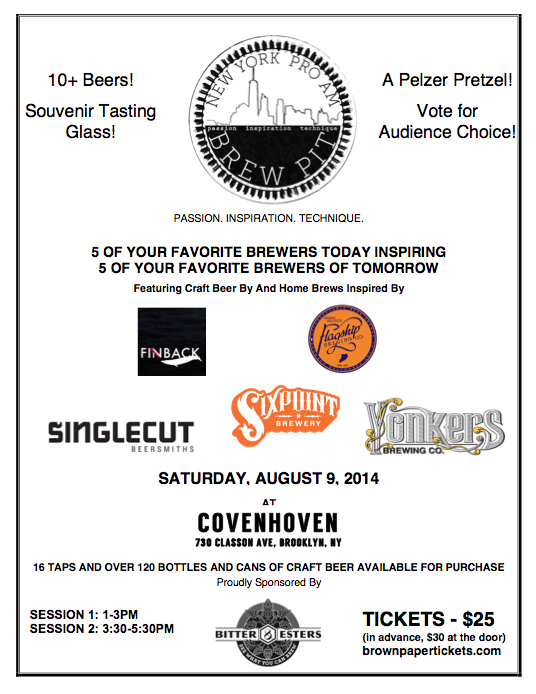 Before coming to Flagship Brewing Company in Staten Island, Patrick Morse was head brewer at Los Angeles, California’s Eagle Rock Brewery. In 2010, Eagle Rock entered the Pro-Am Competition at Great American Beer Festival (GABF), which pairs breweries with homebrewers and their award-winning recipes. The entry, Red Velvet, was the recipe of Donny Hummel, who brewed the hopped-up red ale with Morse at Eagle Rock.

It won a gold medal.

“The best thing was to call Donny up and tell him the good news. It was his moment,” says Morse. “I still have great memories of that experience.”

This fondness explains why Morse, now brewmaster of Flagship, is one of the participants in the NY Pro-Am Brew P.I.T. at Covenhoven on Saturday, August 9. P.I.T., an acronym for “Passion Inspiration Technique,” will feature the recipes of homebrewers but differs from GABF’s Pro-Am, and even Food Book Fair’s Brew Pub, which we previewed in April. The event, sponsored by Bitters & Esters, paired five amateurs with five breweries — all from New York. The former visited the latter, then created a beer inspired by their experience. Each will pour that beer alongside their respective professional, also serving one of its beers, at Covenhoven.

“They met one-on-one for a day and in some instances were able to help on a brew day,” says Robert Sherrill, a homebrewer who organized the event with Bitters & Esters. He lives in Crown Heights. “Being able to showcase these homebrewers and professional brewers at my favorite bar and being able to partner with my favorite homebrew supply store just underscores for me what this event is really about. It’s about community. Beer brings people together.”

The winner of P.I.T., as voted by ticketholders during the two sessions (1-3:00 p.m., 3:30-5:30 p.m.), will brew their recipe with Chris Cuzme, brewmaster of 508 GastroBrewery in Manhattan. Before Saturday, we asked each homebrewer to breakdown their beer. 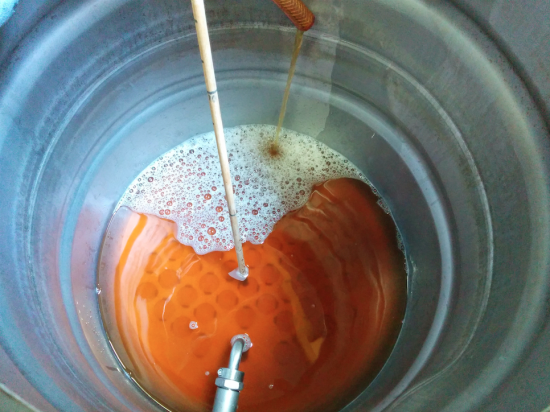 “In learning the recipe process with SingleCut, I found out the brewery tries to style their ingredients to memorialize a musician. I like to style my recipes off of stories I know and the first one that came to mind to connect us was about Link Wray. I knew he had been a forefather of distortion by taking his amp and stabbing it with a pencil to get that fuzzy sound so I decided to concept an American pale ale that was slightly funky and complimented his Southern roots. There’s some wheat additions and a little corn in the bill and I’ve looked to North Carolina BBQ for the flavor additions. It has some molasses and brown sugar to give it that sweet flavor and then some peppercorn and cayenne to spice it up.

We used some heavy aroma hops to compliment the flavor profile but wanted to keep the IBU down a bit and let the BBQ flavor come across. Had there been more time to brew in the competition it would be fun to play with some Brettanomyces yeast and really make the funky distortion aspect come across, but we moved toward Singlecut’s house ale yeast given the timing.”

“I was paired with Yonkers Brewing Company, which is opening a brick-and-mortar brewery later this year. In June, I received a tour of the new hospitality room, aging cella, and pilot brewery, all under construction next to the Yonkers Metro-North train station on the Yonkers waterfront.

I brewed a beer that I call Forbidden Blonde. It’s a honey blonde ale — using honey and Gambrinus honey malt, an intensely flavored, lightly colored malt — married with a Belgian yeast called Forbidden Fruit that I learned about after taking a yeast class at Bitters & Esters. It’s lightly hopped; certainly not for the hop-heads. After a week in the fermenter, a pound of honey was added to dry out the beer and boost the ABV. It should be an ideal thirst-quencher for a hot August afternoon at Covenhoven.

You might say I have beer in blood: my great grandfather was a brewmaster in pre-World War I Prussia and then Berlin before coming to NYC. Unfortunately I never met him, nor is there any record of his recipes. I decided to make Forbidden Blonde because the philosophy behind this style is similar to that of my brewing partner, Sharif Taleb of Yonkers. While getting acquainted with Sharif over a few of our respective brews, I discovered that he isn’t trying to produce the next big imperial IPA — which, don’t get me wrong, I am a still a fan of. Rather, they focus on crisp, clean, authentic brews like those that my great grandfather might have made, brews that are especially good for this time of year.”

“I joined Finback’s owners and brewers Basil and Kevin [Lee and Stafford, respectively] for the second half of their double brew-day of Double Sess, a spiced witbier. Now, I have been on perhaps one too many brewery tours before but hanging in a brewery while in operation was a completely different and interesting experience. We broke for dinner around 11:00 p.m. during the whirlpool and enjoyed some super spicy Indian food over a bottle of Spencer Trappist Ale. Discussions turned to brewing possibilities, like a spicy sour or deeply spiced dubbel, as three of their new beers, all saisons, fermented nearby. Seeing just about every part of the process in full-scale operation and participating was a blast — quite inspirational and somewhat transformative! Dreams of a dark Belgian dubbel doused with spices danced in my head as I departed close to 1:00 a.m. with a growler…

The next morning provided the harsh realization that I did not have the time to age a dubbel in time for the event, so I reshuffled my thoughts and distilled the experience to the themes of ‘double,’ ‘Belgian,’ and ‘spicy.’ I finally arrived at the decision to make two beers from the grains of one Belgian saison via a process called parti-gyle brewing. When I learned that Finback’s three pilot saisons I mentioned earlier included a dark saison and a smoked version I decided to flip the bill and put the spices, lemon chili and ginger, in the big beer, and smoke the second one. It made for a very intense and engaging brewing day and I can’t wait to try them along side all the other concoctions that P.I.T. has inspired!”

“I’ve been brewing for about 10 years and only now had the amazing experience to brew a professional batch of Righteous Ale with Sixpoint in Red Hook, Brooklyn. And my experience couldn’t have been better. It was quite eye-opening to see, in depth, every step in the commercial brewing process. On each brewery tour you go on, one might see a bubbling fermentor or a boiling kettle, but you never quite get the sense of what is truly happening until you can see the grain get crushed, smell the mash tun and pump yeast into the newly brewed beer. Plus, I got to ask a series of developing questions about Sixpoint all while drinking fresh beers while the real brewers did the work!

What I learned from the brewers helped guide me in creating Good Intentions. It has a peculiar grain bill not far off from a crisp Vienna-style lager — primarily Vienna malt, which is in a lot of lagers and bocks — and a hop bill not unlike Sixpoint’s IPA, Resin. It’s fermented closer to where bocks are but with Sixpoint’s ale yeast — I got to use a pitch straight from one of the fermentors! I’d call it a session IPA with the shadow of a Viennese lager, brewed for late-summer afternoons. It’s a beer that, I think, would fit well into Sixpoint’s catalog.”

“After talking with Flagship’s brewmaster Patrick Morse and understanding their lineup of beers, I designed a beer crisp and refreshing, inspired by the traditional taste of European summer beers. Brooklyn/Alt speaks to the bright and drinkable session beers of Dusseldorf and Munich — essentially the kölsch and alt bier — but I’ve added a distinct American twist: I’ve stretched the altbier category to provide more body and a bolder flavor profile while balancing the pale color and refreshment of a kölsch. This beer fits nicely into the Flagship line-up because Pat doesn’t have a beer on the kölsch side of the spectrum. He’s bringing Flagship’s Dark Mild, also inspired by an old European style, but British.”

Tickets for the NY Pro-Am Brew P.I.T. are now available.