When Minnie Puno moved Manila to Brooklyn in 2012, she soon noticed something conspicuously lacking in the local dining scene: Filipino food. 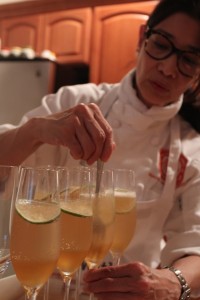 Minnie Puno moved from the Southeast Asian city of Manila to Brooklyn in 2012, “just to try it out,” she says, and to be closer to her two daughters, both of whom who live in Manhattan. After settling in Williamsburg, however, she soon noticed something conspicuously lacking in the local dining scene: Filipino food.

Puno, who has studied cooking in Tuscany and Vietnam and also took a three-month course at Manhattan’s International Culinary Center, believes there are two reasons why the cooking of her homeland hasn’t taken off among non-native diners. “The Philippines is composed of over 7,000 islands, and each region or province has its own specific flavors,” she says. “So unlike Thailand, Vietnam or China, there’s really no distinct national flavor.” Filipino food is also traditionally served family-style, she continues, and lacks the formal presentation of Japanese or French food.

Puno wanted to share  her country’s cuisine with others, but didn’t really want to open a restaurant, a daunting task. Instead, she decided to start hosting bi-weekly dinner parties called Kulinarya. They’re arranged through the meal-sharing site EatWith, which allows locals and travelers to sign up for home-cooked meals prepared by hosts like Puno who love to cook and entertain. (Her next EatWith party will be held July 5; there is a suggested donation of $40.)

“I’m a third-generation amateur chef, coming from a family of cooks in the Philippines,” Puno says. “I used to help my mother in the kitchen, starting from when I was very small.”  Now, she adds, “this is my way of being able to share my cooking with people other than my family.”

For her dinner guests, Puno makes a three-course meal of dishes that draw from her culinary history, French flavor-building techniques and Spanish recipes. (The latter is appropriate given that the Philippines spent nearly 400 years under Spanish rule). “Anyone can just grab a recipe online and cook it,” says Puno, who begins the meal with an aperitif of ginger ale and Filipino lime: “I’m trying to add my own touch.” 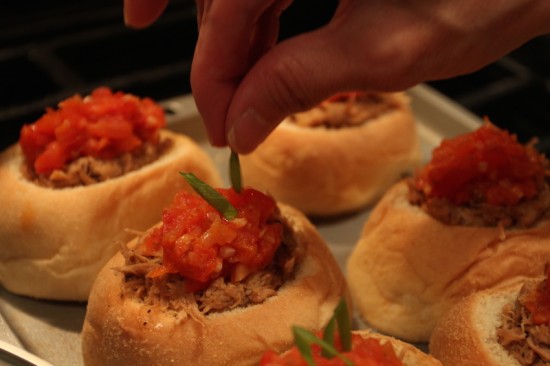 The first course is a riff on adobo, a Filipino classic. Her adobo, chicken stewed in vinegar and soy sauce and then shredded à la pulled pork, is served in cups made of pandesal, a common yeast-risen sweet roll made in the Philippines. The tangy chicken is also topped with Puno’s riff on Spanish sofrito, a bruschetta-like mixture of diced tomato, garlic and spices. 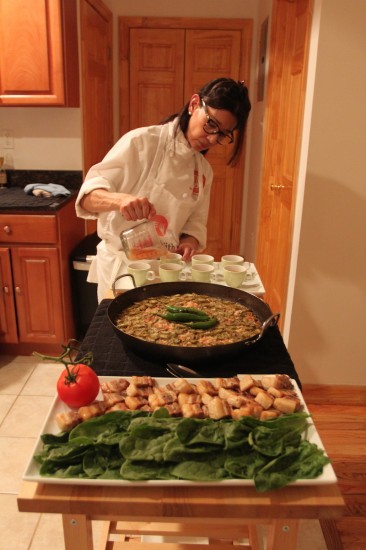 For the entrée, there is a family-style offering of twice-cooked pork belly and sinigang rice, an original dish that combines a traditional Philippine sour soup known as sinigang with Spanish paella.

To make it, Puno boils pork belly in tamarind broth, and then removes the meat and cooks the rice—along with a generous heaping of sofrito—in the cooking liquid. The belly is then broiled to crisp its luscious fat and add some crunch, and then served atop large spinach leaves reminiscent of the banana leaves often used as serving dishes in Southeast Asia. Puno also gives her guests an espresso cup filled with the flavorful tamarind broth — “Beautiful,” enthused Nir Feller, a Tel Aviv chef at a recent meal — used to cook the pork belly. 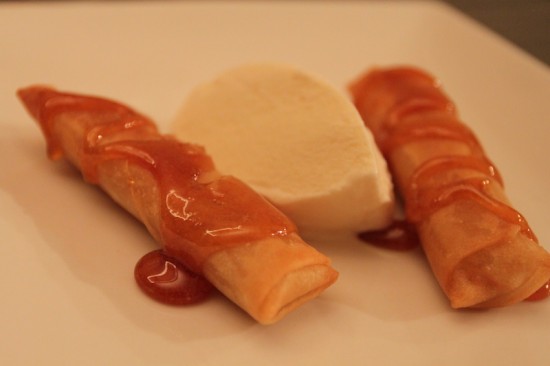 “I want my guests to take with them memories of a delightful taste of Philippine cuisine,” Puno says. Indeed, by the time guests devour the last of Puno’s dessert — crisp banana rolls drizzled with caramelized sugar and complemented with vanilla ice cream and reminiscent of lumpia, the skinny Filipino version of spring rolls—most are happily sporting bulging bellies. What’s just as important, at least to Puno, is that they have also consumed a crash-course on Philippine cuisine, culture and history.