White-clad diners descended on Prospect Park for a pop-up picnic. 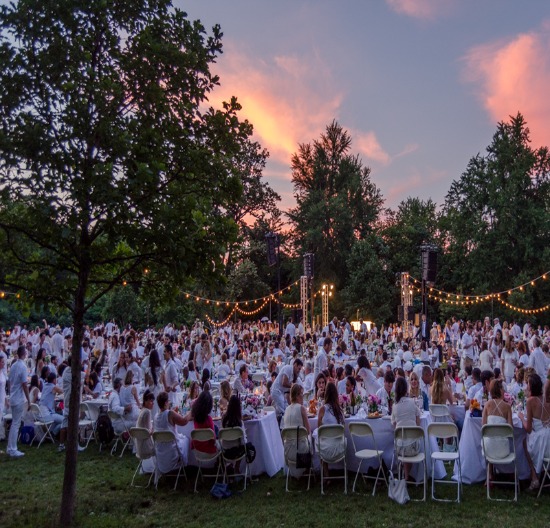 If you were near Prospect Park on Saturday evening, you might have seen a peculiar sight: swarms of people taking the trails dressed head-to-toe in white, wearing flowers in their hair and carrying baskets and balloons.

Just hours before, the 4,200 visitors had learned the location of an impromptu dinner party, which they were to host. They headed to the Peninsula, where they decorated tables, took in views over the lake and cheered for a solo performance by Ben Folds — all while wearing nothing but white.

The park was the latest destination for Hand Made Events’ PopUp dinner party. Its creators, Garrett Sathre and Nicole Benjamin, were inspired by a similar event, Diner en Blanc, where a small group of friends wore white so they could find each other in Paris’ Bois de Boulogne in 1988. Since, similar parties have popped up across the world, from Singapore to Sydney, Canada to Copenhagen, and Hand Made has hosted “white parties” across the U.S.

In Brooklyn, guests started trickling in to the park at 5 p.m. to dot their tables with flowers, candles and white balloons. There were also compliments for Hand Made, which provided tables and chairs, while similar events in the city have relied upon diners to bring their own.

“It means that it’s less of a picnic and more of an elegant dinner party,” said diner Sarit Wishnevski, from Astoria. “We can focus more on the decorations and food.”

Partygoers went all out with their wardrobe choices, too, and finished their all-white looks with feathers, fedoras and parasols. Some upped the elegance factor, including Randi Bonica, who saw it as the perfect opportunity to recycle her floor-length wedding dress.

“It’s ideal for tonight,” she said. “Why wear it just once?”

Some of the food was just as fancy as the guests. There were oysters on ice, bottles of champagne and a cake stand strewn with white truffles. But on other tables nearby, partygoers snacked on takeout pizzas and bags of chips.

“Brooklyn is becoming the food capital of the world,” New York senator Chuck Schumer, who attended the event and enjoyed homemade swordfish, told Edible Brooklyn. “From ethnic food to artisanal food, there’s nothing that the city hasn’t mastered. Tonight is an example of people being creative and sharing that passion with others.”

His wife, Iris Weinshall, is the chairwoman of the board of directors for the Prospect Park Alliance, which was receiving the proceeds from the $35 ticket cost. She said that never expected everyone to dress so immaculately in white, and laughed as she pointed out that her husband was the only one not adhering to the rule. (“He’s going to a wedding later so we’ll allow it,” she explained.)

Once the tables were covered with flowers and food, Senator Schumer stood on stage and raised his glass to the park, signaling the start of the feast.

Guests chatted with old friends, shared stories with new ones and took their glasses of champagne to watch the sun set across the water. But as the park darkened — lit only by candles and strings of lights — attention turned to the small stage in the middle of the tables, where Ben Folds sat at a white piano, emblazoned with the emblem for Acura, which sponsored the event. 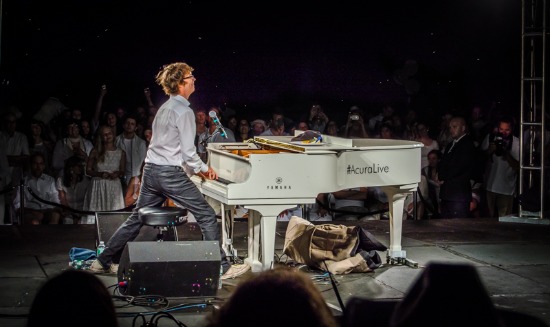 “You are all so nice,” Folds told the crowd as they took a break from bopping to his best-known tunes and blew bubbles over the stage. “I had no idea what to expect playing in the middle of the park.”

To the joy of the guests, he even played his “Rockin’ the Suburbs” with a white-party twist: “Bugs in my mouth in Prospect Park,” he sang to laughter. “Everyone’s wearing white, so I thought that I might play an Acura piano and rock this bitch in a park. Rockin’ this bitch for the white-dressed people…”

After his short set, Folds made room on the stage for a DJ, and the crowd, before packing away their decorations and leftovers, danced.

One diner, Asti Spinelli, 35, said the night had far exceeded her expectations. ‘The atmosphere has been amazing,” she said. “It’s like coming to Brooklyn for a picnic with a thousand of your closest friends.”