Everything in front of me last night was from either one of two Blue Hill owned patches of land in New York or Massachusetts, or from a nearby purveyor scoured via Dan Barber’s eagle-eye and particular sourcing — bursty little grape tomatoes, purslane, and waxy yellow and green beans, bits of aged goat cheese, peaches, cucumber. All so fresh and bright and deliciously representative of what our local agriculture is capable of. So to be sitting across from a couple of California winemakers might have seemed slightly out of place to the discriminating farm-to-table eye. But the gentleman I was dining with — Bob Blue, Jeff Chichocki, and Dave Koball — are the team behind the certified organic and biodynamic mass-market wonder, Bonterra, and our discussion was as appropriate as the sweet first-course July baby corn on my plate.

I say wonder because while organic has entered the mass lexicon and is by and large accepted (although certainly still misunderstood), biodynamic still lingers in the hinterlands of suspicious, eye-narrowing terms to many. But back in 1987 when Bonterra began farming organically, even that common bit of agricultural lingo wasn’t ready for prime time. Blue and his team were committed, though — with a big part of the influence coming from the biodynamic gardens carefully cultivated at Fetzer, who have long had a sincere and dogged sustainable focus in their wine production, and is, in fact, where Bonterra got its start.

Blue and the gang were in town to show barrel samples of recent vintages of their McNabb and Butler red blends from the biodynamically farmed vineyards of the same name, as well as their new Burgundian-style biodynamic Chardonnay, donned “The Roost” for its proximity to a Blue Heron nesting site — something that immediately made me go, huh? How could these things live in such close proximity to each other? Hence the beauty of the biodynamic farming scheme. “Actually, the herons eat the gophers,” said Chichicki when I asked how the two could possibly co-exist. “The vineyard has actually been there longer.”

I couldn’t help thinking that for those who think biodynamics is a mysterious dung-filled bull horn of mystery (Bonterra actually uses a demure logo of the infamous biodynamic symbol on their single-vineyard series), listening to Blue, Chichocki, and Koball talk about it would make sense of the agricultural practice to even the most brow-furrowed doubter. Head-scratching terms aside, it’s a system that takes into account everything –people, plants, animals, insects, wind, sky, sun, soil, rain, neighbors, weather patterns. Everything. And, Blue says, while taking into account all of those things, it’s also a system of self-reliance. You know, kind of like most farmers do (or, well, most farmers not using GMO seed and toxic spray to laughably attempt to wrestle Mother Nature to the mat). 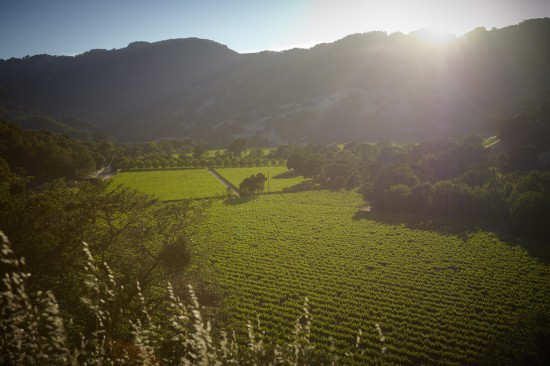 “If you’re a farmer in Nebraska, and the closest farm to you is 8 miles away, and let’s say you have no phone and no internet and no TV — you have to rely on yourself to pay attention and be in tune with what’s around you. Or you go hungry,” he said. “It’s about balance — not just in winemaking, but in farming, too.” With other well-known, well-distributed biodynamic wineries, like Bonny Doon in California’s Central Coast, Sonoma’s Benziger, and, although smaller production in comparison to these others, Long Island’s own Shinn Estate Vineyards, maybe, just maybe, more versions  of better, healthier, thoughtfully grown and made wines will be coming to a glass near you. Here’s hoping. This isn’t to say everyone should be biodynamic or certified organic — I’ve often been told by many small-production wineries that they simply can’t afford to do it — or that all biodynamic and organic wines are good. But to think in this way of everything that’s around you, how you affect it, and how it affects you — that’s the kind of sustainable thinking that actually means something.

It's Still Cool, So I Baked a Cornmeal Crisp--and You Should,Too

Le Crocodile at the Wythe Hotel Serves Up a Worthy Escape