At Talde, A Greatest Hits of Asian-American Cooking

Recently, when Stephen and I sought refuge from the frigid avenue in a dark-lacquered, high-backed booth at Talde in Park Slope, there were several clues we had come to the right place.

Recently, when Stephen and I sought refuge from the frigid avenue in a dark-lacquered, high-backed booth at Talde in Park Slope, there were several clues we had come to the right place. The table was adorned with chilis in vinegar, a condiment we hadn’t seen since a forlorn trip to a Beijing dumpling house. And leading off the cocktail list was the Chinatown, a rum-based concoction that reigns from San Francisco, is topped with lime, black pepper and brown sugar, and is built to go with flavors from the Orient.

(In full disclosure, I am a self-proclaimed dumpling hound whose teeth water at the hint of any cuisine found along the Silk Road. I’ve been seen waiting in line for the Hong Kong style cooking at Red Farm on Hudson Street, and I’m still bragging about the nose-to-tail duck gyoza I gobbled at Gramercy Tavern.)

Guiding us through our journey that night was John Bush, the illustrated man who runs the drinks side of the operation at Talde, as well as at nearby sister restaurants Pork Slope and Thistle Hill Tavern. Bush credits his deep love of conviviality as much to the Irish as the Italian in his blood. (Had he not found a calling in the restaurant world—with stints working for Mario Batali and other—he would have followed his family’s path to the police academy.) Along with partners David Massoni and chef Dale Talde, the triumvirate opened three restaurants in 2012, with another planned in Brooklyn for 2013. For whistle-whetting at Talde, Bush has selected plenty of excellent New York beer and wine, but it’s his cocktails that perhaps best complement the Asian fare conceived by Dale Talde. 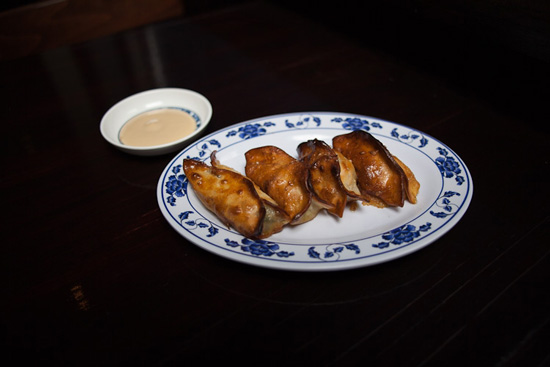 Talde, the precocious, pain-staking chef—who was a standout on Top Chef, honed skills at Buddakan and Morimoto and at barely 30 captains three successful kitchens–has produced a menu that isn’t fusion or mashup, but instead a rotating homage to his favorite dishes from what he calls “Asian-American cooking today”—whether Korean-style fried chicken, Japanese crudo, Hawaiian bread buns or Thai salads. And when the food started to arrive, it was a greatest hits indeed.

There were pretzel, pork and chive dumplings, a green mango salad, Long Island fluke topped with black bean brown butter and cilantro, Korean fried chicken with spicy kimchee yogurt, grapes and mint, and lobster tom kha with coconut milk and rice noodles. The sides included fried rice, shrimp toast and “#369,” market vegetables in green sambal (a paste apparently made with over 300 plant ingredients). I’d like to enter the sambal Brussels sprouts as a contender for most awesome farm to table Southeast Asian since our contributor Rachel Wharton called Purple Yam, the Filipino joint in Ditmas Park, “sublime.” Talde has amassed an impressive list of purveyors: there’s Heritage Foods pork in his crispy oyster and bacon pad thai and plenty of Montauk squid in his charred lemongrass calamari salad with green papaya and grapefruit. One of the most popular desserts is an homage to the shaved ice and fruit concoction his mom would serve topped with Cap’N Crunch.

When our meal was through, we stumbled through a crowded room (Steve Buscemi and Jo Andres were among the cozy regulars.), and down the street to Pork Slope (whose kitchen and bar are open until 4 a.m.) to hear Bush wax poetic about cold-season drinks, and the plans these restaurateurs have to add a fourth location in Brooklyn (not in Park Slope). Even the next day—the next week–the hold of Talde didn’t relent, and when I checked the online menu again recently, I saw that duck banh mi, lamb pho and Buddha’s delight had crept onto the list, beckoning us like a takeout menu pushed under our door.