Labor Day Weekend Special: Win Tickets to Pig Island Plus a Whole Pig for Yourself 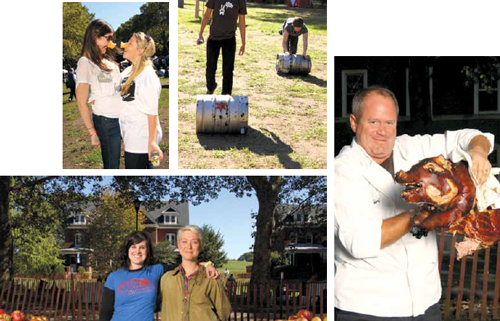 Chances are–unless you’re a vegetarian–some kind of pork is going onto some kind of grill this weekend. So in the spirit of better barbecue, the folks behind the Pig Island fest at Governor’s Island (which we’ve taken to calling Edible Island, mainly due to this amazing event) have decided to offer our readers a whole durn pig: a 50 to 70 pound gutted and cleaned local, free-range porker.

Pig Island, which happens next Saturday, September 10, features 80 more of those pigs cooked by 20 chefs with spectacular views of the harbor and the city. (Tickets, and more information, right here.) All you have to do is tell us in the comments below what you will do with your winnings. What will you do at your own Pig Island? Make bacon and sausage and headcheese? Cook it whole in your backyard over a spit? Stuff it with rice and raisins and roast it Bolivian style?

The answer we like most–we’ll pick a winner next Tuesday afternoon–wins the commenter tickets to Pig Island AND a whole pig, to be picked up next Wednesday in Union Square when the animals are doled out to chefs between 11 a.m. and 1 p.m. (Runners up will also score free tickets to the event.) You might also need to be able to lift 50 pounds, or have a few friends who can help you.  Not only will you get a pig, but you’ll be able to donate one to one of two food-based charities in the city, which we’ll tell you about next week. Until then: comment below to win a pig. A whole pig!