From biscuits so good they’ll make you think you’ve teleported south of the Mason Dixon to a classic slice, here’s where our editors and writers might be found on any give late night. 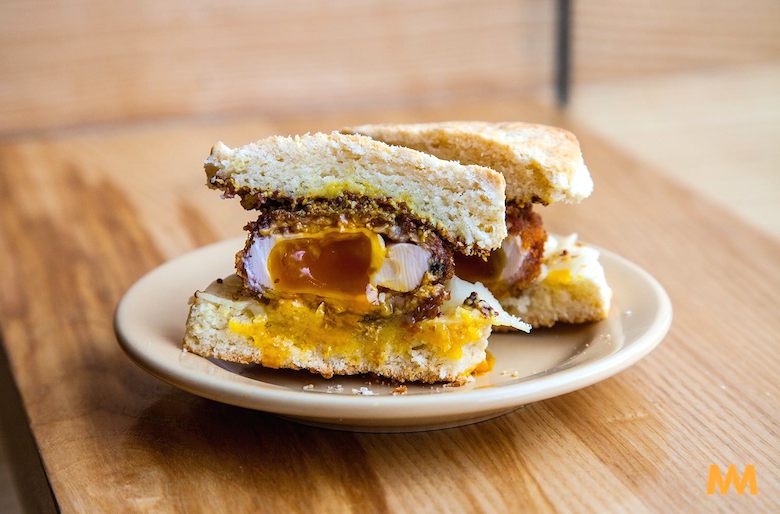 We’re no strangers to the difficulties of finding a good bite or drink after a certain hour in the city. From biscuits so good they’ll make you think you’ve teleported south of the Mason Dixon to a classic slice, here’s where our editors and writers might be found on any give late night.

Where do you like to eat and drink after midnight? Let us know by leaving a comment. And looking for even more food and drink options? Check out our guides on both Edible Manhattan and Edible Brooklyn.

Jessica Chou: Middle Branch
Once, after a terrible date, I stopped by with a friend and the doorman took one look at me, directed me upstairs, and told me, “Don’t worry. You’ll find him.”

Gabrielle Langholtz: Tooker Alley
As a working parent, my late-night spot is usually my kitchen (dishes) or computer (deadlines). But I recently relived my carefree 20s for a night, thanks to Tooker Alley owner extraordinaire Del Pedro. Back in the day, Del poured me drinks at Grange Hall over in the West Village, where he was such an icon that I couldn’t wait to immortalize him in print. St John Frizell wrote: The city has reinvented itself dozens of times before Pedro’s eyes, and he’s watched every change from the best seat in the house — the one behind the bar. While pouring your poison, he’s likely to discuss Russian literature, The Godfather, the proto-punk ’zine Trouser Press, sex, sports, or 21st-century poetry (“It’s like in that Paul Violi poem: ‘Veni, Vidi, Velcro:/I came, I saw, I stuck around.’”), all in a reedy voice that recalls ’70s rockers like Alex Chilton and Marc Bolan. It’s no wonder he’s acquired the reputation of a real bartender’s bartender. In an essay called “A Date with the Deldo,” whiskey maven Lenell Smothers says, “I have mixologist friends, so don’t get me wrong. But when I’ve had a shitty day, need my spirits lifted, I go sit with Del.”

Talia Ralph: Dynaco
Ever since my first apartment was magically two blocks away from one of the best Irish bars in Cambridge, I’ve had “awesome neighborhood bar” on my list of quality of life must-haves. Enter Dyanco, an incredibly cozy bar in my new-ish neighborhood of Bed-Stuy that is decked out with old speakers and a stand-alone fireplace, plenty of booths, and friendly bartenders. They also make a mean Old Fashioned, serve goldfish as bar snacks, and dole out chocolate cake by the slice ($6, with milk if you want it). I plan on waiting out the rest of winter in their back room.

Caroline Lange: Joe’s Pizza
I am a sucker for a hot piece of pizza in the middle of the night, and Joe’s is the best I’ve found. I’m partial to the one on Carmine in Greenwich Village, where you can eat your pizza with other dirty stayups standing at round tables out on the sidewalk, or across the street by the fountain in Father Demo Square. Its slices are no-frills and handed over the counter on greasy paper plates.

Ruth Temianka: Diners, in general
They’re the stuff of legends filled with world-weary detectives, wise-cracking staff in frilly aprons and the smell of hot pie and coffee at all hours. Or at least that’s what Hollywood taught me. Though my inebriated roots would slowly inch towards a curry or kebab after too many hours, transplanted offshoots now acclimate to the light of these mysterious “diners” instead. This baffled patron now attempts to commune with grape jelly and egg-based menu options that sound more like plea-bargains with dark powers to ensure the sun will indeed “come up tomorrow.” The fedoras aren’t sitting on sleuths and most definitely no-frills so far. Still, I’m always looking for that stealthy nod from a pie-eating regular confirming the legends are true.

Sari Kamin: Decibel
There’s a sexy little sake bar in the East Village that I stumbled upon when I first moved to New York. It’s easy to miss but once you’re inside you’ll feel like you’ve entered a subterranean speakeasy somewhere in Japan. The lighting is dark, the sake list is long and the servers are all Japanese with painfully hip haircuts. This is not the place to try and impress your date with your (lack of) sake knowledge. There are over 100 choices on the menu, so get a recommendation from your server and a couple tasty snacks to soak up the alcohol. You’re gonna need it.

Lauren Wilson: Empire Biscuit
The only time I visited Empire Biscuit, I could’ve sworn that I was hallucinating. It was sometime after 2:00 a.m. in July and I was tipsy and alone with everybody on Avenue A. The entrance was lit up like a bug zapper, and true to mindless insect form, I drifted through the doorway without hesitation. A waft of butter and fried chicken made me snap to—my primal senses had clearly led me to a sort-of paradise. Born Southerner, I had a Proustian moment with one of their chicken biscuits and some fried green tomatoes. The rest is a blur, but I did manage to acquire some essential late-night-in-New-York-knowledge that evening: Their biscuit kitchen is open 24 hours.

Carrington Morris: Momofuku Milk Bar
Late-night coffee drinkers are surprisingly hard pressed to find a quality brew after dark in a city that never sleeps. Quests in my neighborhood have led repeatedly and exclusively to the happy pink neon glow of Momofuku Milk Bar, where they’ll even dress your espresso up in an ice cream shake if you’re so inclined. But get there by midnight or it’s lights out.