PHOTOS: How and Why a Herd of Goats Grazed Below the Manhattan Bridge

We caught up with farmer/artist Andrea Reynosa to learn more about her idea for the pasture, why goats and what lessons she hopes viewers will glean from the installation. 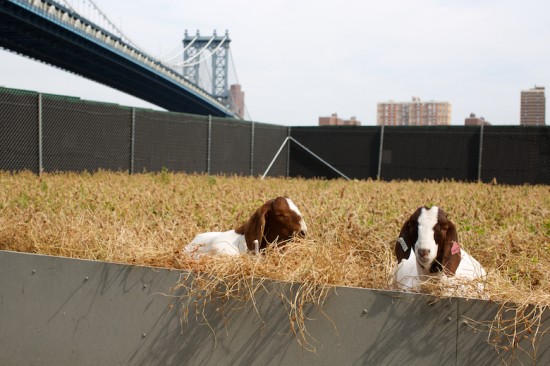 Goats grazing beneath the Manhattan Bridge.

Most of us New Yorkers are deprived of contact with a wide variety of flora and fauna — much of what’s green in this city is ornamental, and the critters around us (if not pets) are largely considered to be vermin. Enter a clover field and goat herd within the city limits though and what might seem unremarkable in any other part of the country can easily become an urbanite’s pastoral spectacle.

And that’s what recently happened on the banks of the East River. Artist Andrea Reynosa installed a “living earthwork” — or a cover crop of crimson clover in this case — at John Street Pasture in DUMBO. The project was a collaboration between Reynosa, Alloy (the site’s developer), Brooklyn Grange, Smack Mellon Gallery and Brooklyn Bridge Park meant to “[activate] the space through a temporary art installation that brings together soil and plants to explore and celebrate land use, sustainable agriculture and a city in transition.”

These may seem like lofty goals for a patch of crimson clover, but focusing attention on an otherwise overlooked cover crop was part of Reynosa’s point — she wants us to see it with new eyes.

Reynosa is also a farmer based in the Catskills who, in addition to regularly using crimson clover on her farm, supplies produce to several outposts in Brooklyn including Superfine, Mayfield, The Long Island Bar and an office CSA share at Brooklyn Roasting Company. On top of all that, she also teaches classes in sustainable agriculture at her local community college and will be traveling to the Santa Fe Art Institute next year to do an artist residency program focusing on desert agriculture and food justice.

We caught up with her to learn more about her idea for the pasture, why crimson clover is a work horse crop and what lessons she hopes viewers will glean from the installation. Keep scrolling to see photos of the (real, live) herd that was commissioned to mow down the space as a sort of grand finale. Although they may have stolen the social media show, the goats’ main purpose was to “just wrap up” the project.

Edible Brooklyn: How did you become interested in creating this installation?
Andrea Reynosa: My interest in creating John Street Pasture was prompted by collaboration with Amy Lipton of Ecoartspace and Smack Mellon Gallery in the development of the FOODshed exhibition in September 2013 when the exhibition was being scheduled. It was brought to our attention that Regina Meyer, President of Brooklyn Bridge Park, was willing to consider proposals for outdoor installations for the exhibition. Being a sculptor and farmer, the inspiration to create a temporary pasture in the park for FOODshed came in a flash.

EB: How were you able to secure a space right on the East River? It’s a great place to get a lot of attention, especially during the summer when so many people are at Brooklyn Bridge Park.
AR: What happened is that Smack Mellon has a working relationship with the Regina Meyer, the president of Brooklyn Bridge Park, and Janet Biggs set out a pretty ambitions kayaking ballet in one of the inlets there at the park and I think that had kindled an openness to collaboration.

When we started talking about growing things and food production, Regina’s name came up and Kathleen Gilrain, the director of Smack Mellon, suggested that we get in touch with her and maybe propose doing something in the park, which I thought was really exciting and challenging.

I had to do a lot of concept designing ahead of time before the presentation with Regina Meyer; the proposal was just a simple minimalist plane of green, or some sort of cover crop and pop-up pasture concept, and they liked that. So we went into our own private meetings and developed the concept to see if we could really commit to doing something that ambitious, and everything eventually flowed into Brooklyn Grange coming on board. The park was willing to collaborate with the soil and having a crop that would bring in nitrogen. Everything eventually worked, and it actually went pretty quickly… there was just the right energy at the right time with the right people.

EB: So speaking more to the artistic concept of the project, how do you think this living installation can education visitors and what conversations do you hope this project will inspire?
AR: I really hope that people have a deeper respect for clover as a work horse for soil improvement and soil management. I also hope that it is very visually pleasing. Clover also attracts beneficial insects; it’s got kinda that permaculture flag that has so many different uses, which is valuable whenever you’re thinking about a farm management plan.

One thing that came out recently that might interest folks in relation to the piece is Dan Barber’s op-ed in The New York Times in promotion of his new book; it talks about how as consumers, we need to be more cognizant of cover crops as an actual menu item to support farmers to grow this food — because it is food! It’s just not being grown as such because most people aren’t aware that it’s consumable. [For example, there’s] mustard greens, pea shoots and more. I thought that it was interesting that that piece came out as we were diving deep into the pasture piece. It’s on people’s minds, I think — soil’s right under our feet, you know? It can be the problem, or it can be the solution, and it’s up to us to make the difference.

EB: What got you interested in farming?
AR: I come from Mexican ancestry and my grandfather had a sustainable garden that he used to feed his family. It gave him a lot of independence and watching him grow food as a young child inspired me. When I get out there, I feel really connected to the earth and my ancestry. I couldn’t not do it, you know? It’s like being an artist; people ask you often why you do it and my response is that I just couldn’t do anything else.

EB: How do you think a field of clover might spark these conversations without explicitly prompting its viewers?
AR: A field of clover can create a subtext for conversation not only about sustainability (as it has done in with John Street Pasture) regarding soil stewardship and cover crop rotation, but also land use issues such as urban environmental remediation and habitat reclamation. These topics provide ground to unleash a myriad of discussions on how we view mother earth and simple solutions and actions we can take to make our surroundings more liveable and resilient for our ourselves, our children and neighboring species.

EB: Right before I heard of your project, I saw photos of an installation that was done in Battery Park in the 80s where the artist grew a wheat field. Was her work an inspiration for you?
AR: A lot of people have actually brought up her piece, which makes a lot of sense. Hers is really talking more about Wall Street and the commodification of wheat. In contrast, my piece is really talking about soil. It’s talking about soil fertility [and] soil improvement. [My pasture] is much more complicated than just growing a field of clover instead of a field of wheat; it’s the evolution of a concept that’s gone from one generation of artists to another now that we’re in 2014 and we’re having different conversations around food and agriculture nowadays. The issues are different. Mine’s also in Brooklyn and not in Manhattan, which says a lot too since the art world in the city has changed in that same amount of time…

Her piece is a great juxtaposition — the Twin Towers are even in the background. It’s really haunting to see the documentation of that piece today. Just like the Manhattan Bridge is really pretty dominant in the documentation of this piece, and the river. Just the site itself being right on the river and in DUMBO has its own kinds of connotations. What’s wonderful about art is that it leaves a lot up to the viewer’s interpretation and they can fill in the blanks and create their own narrative. 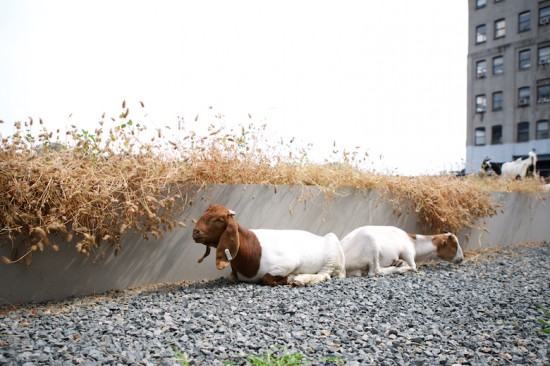 The goats were secured through a partnership between Brooklyn Grange and Madani Halal, a local butcher. 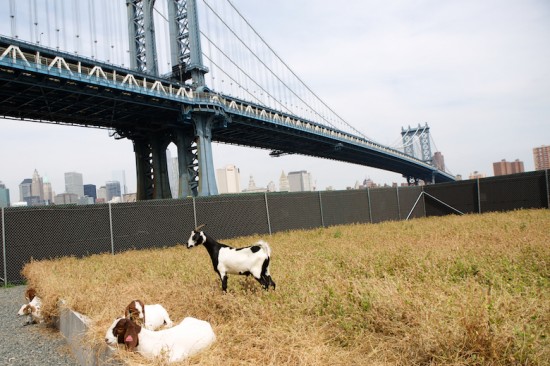 After leaving the exhibit, the goats were taken to pasture at a local educational farm. 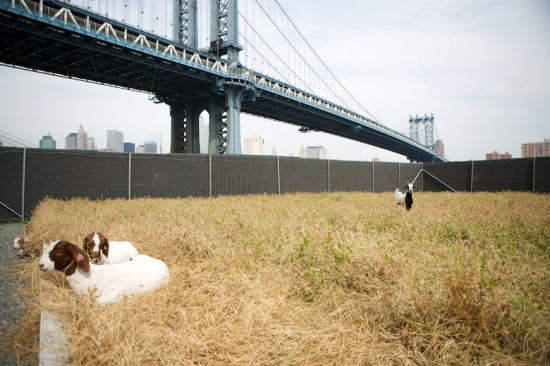 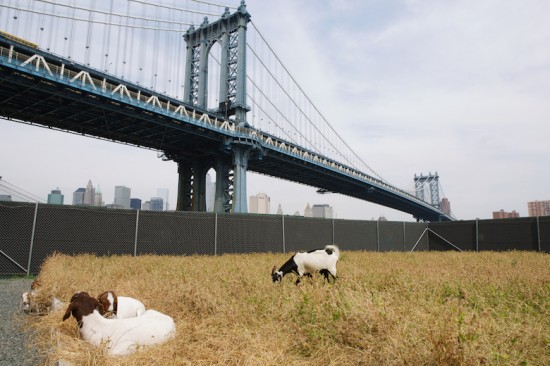 Now that the exhibit is over, the site will become a northern extension of an expanded Brooklyn Bridge Park. 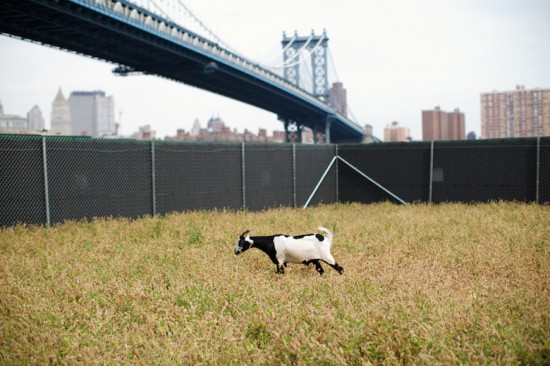 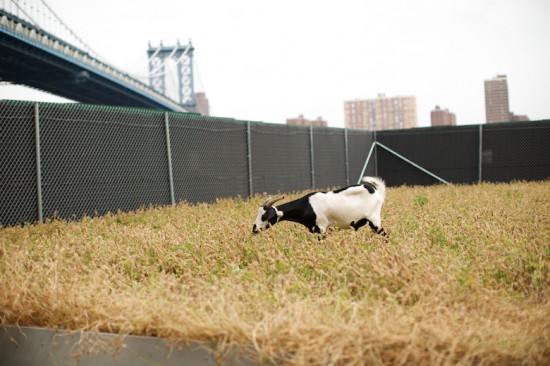 The actual footprint of the exhibit will become One John Street, a residential building that will include an annex of the Brooklyn Children’s Museum. 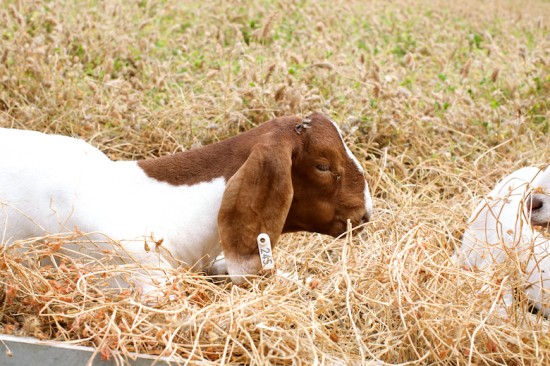