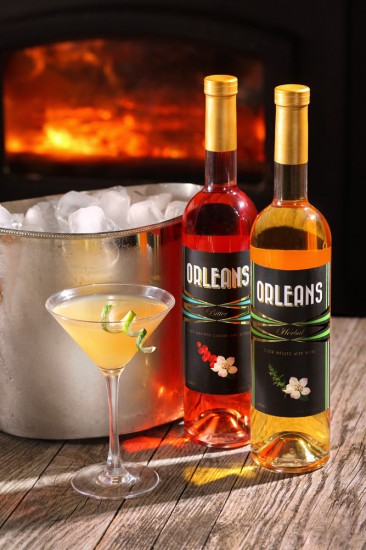 You know the dream – ditch the rat race, kick the shiny leather shoes and tailored clothes to the curb, shrug into some flannel, buy a farm, breath fresh air, get your hands dirty. It sounds nice, but the reality of the particulars – making a living, learning to farm, the disturbing quiet of dealing with at least 7.5 million less people around you at all times – isn’t something most of us can actually hack. Those who do, though, tend to find something special. In the case of Eleanor and Albert Leger – an ex-pat of the software world and chemistry teacher, respectively – it was the apples of the North Country.

“Starting this was about leaving corporate America and doing something in a place that I love to be in and that has more meaning than what I’d been doing,” says Eleanor. “Plus, this was something we could do together, which is really fun.”

The Legers found themselves a sprawling abandoned dairy farm in West Charleston, Vermont, perfect for spreading seeds. By the winter of 2007, the Eden Orchards and Eden Ice Cider Company were in business. Five years and 1,000 trees later, Eden’s four Ice Ciders and duo of aperitif ciders (the newest one, Bitter, launches tonight at Good Spirits – go get yourself some!) have gotten nods from some of New York’s most prestigious palates and are poured in spots like Gramercy Tavern and WD50.

The ice ciders are glorious – elegant yet decadent after-dinner treats made in a similar vein to ice wine, only in this case, the plucked, ripe apples are stored until the inevitable Vermont North Country’s freezing temperatures drop. They are then pressed and the resulting juice is left to freeze for over a month, concentrating the sugar content and flavors into something that Johnny Appleseed could never have dreamed possible. And the aperitif ciders? They were, as it turns out, a sort of by-product, happy accident during the learning process of making ice cider.

“It was one of things that one day you say, gee, this thing is tasting great — like an aperitif wine! And wouldn’t that be cool?” laughs Eleanor. “When we work on the concentration for the ice cider, some juice is just not high enough in brix,” she explains of the density of the sugar. At first, Albert and Eleanor thought maybe they’d ferment the unusable juice and see if a local distiller might want it to make into apple brandy. But when they sampled it, the fermented apple juice was so subtle and special, they had another idea.

Eleanor called up the owners of Woodstock, Vermont’s Osteria Pane e Salut, Deirdre Heekin and Caleb Barber, who also authored the herb-centric sipper tome, Libation: A Bitter Alchemy. Eleanor told Heekin about her juice and her idea to make it into an aperitif apple wine and a collaboration was born. The result: Orleans, apple-sweet and mildly minty on the nose, but dry and gorgeously, gently herbaceous on the palate. The kind of sophisticated preamble to dinner that makes you wish you were sitting along the Seine at 4pm with a glass and a sigh.

Its name has triple origins – it’s the country in which Eden sits; an homage to New Orleans, LA, home of the well-crafted cocktail; and finally, it’s a word that is the same in both French and English, a nod to Eleanor and Albert’s bilingual and French-Canadian lineage.

“Its herbal base is basil and anise hyssop, which are both members of the mint family. There’s a little bit of a licorice quality and it’s peppery, too,” says Eleanor. Most importantly, though, all the ingredients are grown in Vermont. “We decided early on that there would be no citrus, no spices from the Far East. It’s got to all be stuff we can grow in Vermont. We want to be good at this and focus on what we know how to do. Fermentation for us is where we want to keep getting better.”

Air Co. Vodka Is Making a Spirit Out of Carbon Dioxide

Cophenhagen’s Empirical Spirits Is Now Available in the United States