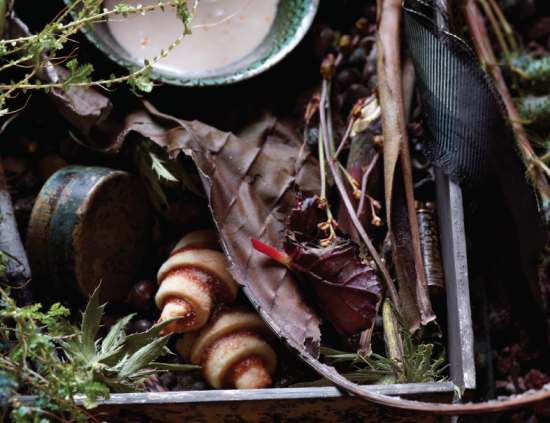 You may remember that we highlighted another one of Gather’s recipes earlier this year when they released their summer issue. Truth be told, fried chicken and April Bloomfield’s deviled eggs are a couple of those glorious recipes that aren’t necessarily tied to any season. They’re plenty satisfying no matter what time of year it is.

For something that feels a bit more wintery though, we wanted to share their take on the Hannukah dessert classic: apricot-fennel rugelach. The one thing that might make this dessert even more appealing, especially on the 80th anniversary of the repeal of the 18th amendement, is their “eskimo kiss” cocktail — vague name, but composed of some tempting ingredients: chai-infused rum, walnut liqueur, honey syrup, ginger syrup, heavy cream, whole milk and freshly ground orange peel. Big props to Yana Volfson of Freeman’s and Peels for dreaming up this libation.

Our sister publication Edible Manhattan has been equally inspired by Freeman’s and Peels. We did a video segment on NY1 with their pastry chef back in 2011 as an accompaniment to our piece on Freeman’s in the January-February issue. Might we suggest that they are fitting reads to curl up with, along with rugelach and a chai-infused rum cocktail, of course…