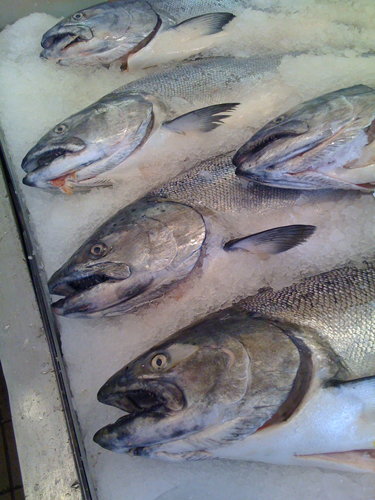 On December 26 the Food and Drug Administration issued a statement that the first genetically engineered animal is safe human consumption. A company called AquaBounty Technologies created a gene-spliced salmon that grows far faster than wild or even farmed salmon, using DNA of two species of salmon, along with an eelpout.

Eric Ripert of seafood temple Le Bernardin says, “I think it’s totally wrong and I am not happy to see this ‘Frankenstein’ kind of salmon, or any fish produced this way, enter the market.”

Mary Cleaver of the organic eatery The Green Table shares these concerns. She says the FDA’s review has been “very minimal, under unusually lax regulations. The FDA only looks at the company’s own studies. AquaBounty culled the abnormal fish to create the sample groups for their studies. We don’t know what the health risks might be.”

According to the Organic Consumers Association, even though AquaBounty’s studies were designed to conceal potential risks, they still show that its AquAdvantage® salmon is less nutritious, more likely to trigger an allergy, and could increase cancer risks by raising levels of IGF-1, a hormone linked to prostate, breast and colon cancers in humans. Nevertheless, the FDA concluded that these concerns didn’t pose enough of a health risk to deny approval—or even require labeling, something the EU does.

One threat government regulators did take seriously was genetically engineered salmon escaping and contaminating already imperiled wild salmon populations. Escape would be a certainty if they were raised in the open ocean; roughly 2 million farmed salmon escape into the North Atlantic each year competing with wild salmon for food and mates.

To allay these fears, the AquaBounty application is for inland tank production only—building artificial oceans on land, and the GE salmon would be rendered sterile.

Moonen points to another resource issue: Raising salmon, a carnivorous fish, in captivity, he says, is like raising lions for meat. These artificially quick-growing GE salmon eat more than twice as much as normal salmon endangering the food supply of an already fragile wild salmon fishery.

Public comment on the FDA statement has been extended 60 days until April 26, 2013. Make your opinion known here.